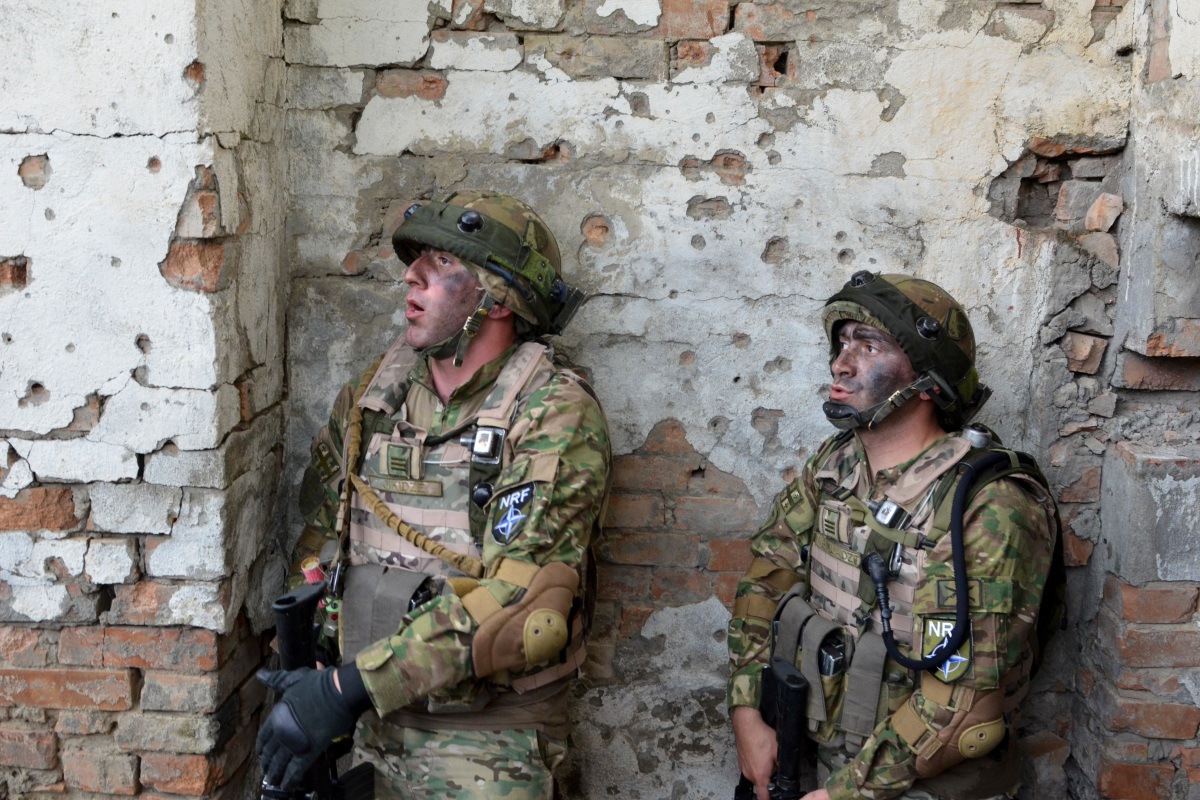 Continuing our City and Urban Warfare theme, we are doing a bit of future-gazing and considering technological methods of overcoming the challenges of urban warfare we’ve thought about in previous weeks.

Here are our thoughts:

Urban warfare has long been seen as the great ‘leveller’ in conflict: the home of the rebel; the resistance fighter; Schmitt’s partisan.

One of the reasons for this ‘levelling’ quality is the fact that it counters many of the advantages offered by technology in conflict. Tanks for example struggle in urban warfare without sufficient infantry support, and the multi-level, uneven terrain makes war-fighting far more difficult for even the most well-trained soldier. Not only that, but the very nature of the battlefield means it can be the site for unexpected attack from any direction and from any attacker, who may or may not be marked as a legitimate military target.

While drones are certainly an option, an aerial presence isn’t quite the same as ‘feet on the ground’. For this reason I suggest small scale soldier-portable drones will be one advance in urban warfare, allowing for localised scouting, plus an additional, portable means of attack. As technology progresses, we may even reach the stage of ‘hunter-killer’ robots or at least remotely-controlled urban soldiers to replace troops on the ground; who will be able to exercise cool judgement while under fire and who will be fairly resistant to small arms fire and lesser IEDs.

My first thought relating to a technology overcoming urban warfare challenges was robotics. But, that is obvious. So I wanted to mention three issues that come to mind: AI-based surveillance; increased armour capabilities; burrowing underground.

AI-based surveillance, particularly persistent surveillance can offer a force the ability to know where all people are at all times and where they have come from. We see similar capabilities attached to some drones currently. Such capabilities can tag and track all moving people in an area. This could be used to identify people who have visited a known terrorist safe-house, or bomb factory, but also to follow them and their interactions and conversations with other people. As we know, modern non-state actors are formed into networks, rather than traditional military hierarchies. This gives the ability to know possibly everyone in and connected to the network who could be targeted simultaneously. An AI system could also recognise a particular concentration of known terrorists in one place to signify a potential attack, or position to be heavily-defended. As we know from the fighting in Grozny, non-state actors holding temporary strong-holds is more effective than static ones in urban contexts. So, knowing where such people are before they can set up a temporary stronghold would remove this advantage from the enemy.

Increased armour on individual soldiers goes contrary to a principle of urban warfare: mobility. But, using advanced body and vehicle armour could allow military forces to set up their own temporary strongholds, from which they can fight the enemy in their territory. This perhaps seems strange, but we have seen operations in Afghanistan whereby troops in remote Fire Bases were essentially used as ‘bait’ to draw out the Taliban from their homes into a more traditional battlefield environment where ISAF forces had superiority. These types of temporary strongholds enable military force to determine the position and type of engagements they wish to have, rather than respond to attacks by the enemy.

Burrowing underground is simply a different option to going over ground with air forces, or going through walls as the Israelis did in Nablus in 2002. I admit, this idea comes from Xbox game ‘Gears of War’. Emerging from underground at points unknown to the enemy means that battles are fought on military, not non-state actor terms. It also gives the option to collapse buildings where enemy strongholds (temporary or permanent) are. This perhaps seems an unusual, if not ridiculous suggestion, but the First World War had a large number of burrowing troops digging under no-man’s land to plant explosives under enemy trenches. The modern city base of concrete foundations, underground railway and vast systems of underground piping would make this difficult. Or perhaps more destructive if major utility pipes were destroyed. Perhaps, the biggest difficulty would simply be the machinery requirements; tunnel-boring machines used to create underground railway lines are so big and unwieldy that it is cheaper for them to be dug into the end of their tunnels, rather than removed. If a more flexible tunnelling machine could be created, burrowing might be a possibility, this is future-gazing after all.

Let us know what you think!

3 thoughts on “How could technology overcome the challenges of urban warfare in the future?”