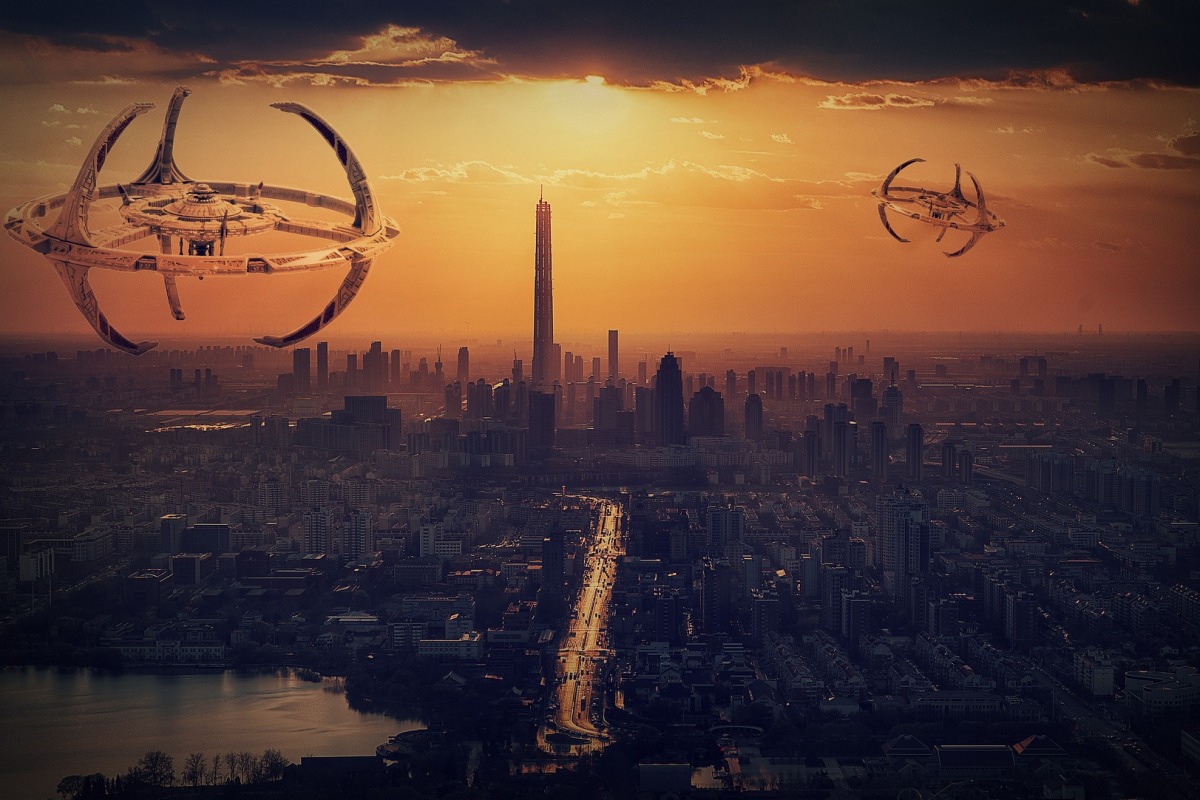 This week we are using the blog ‘Political Science Fiction’ by Chris Borgen as a springboard to discuss how science fiction in particular can be used as a method for understanding bigger issues. In his blog, Borgen discusses a number of fiction works and how they have brought on thinking about larger issues. Hopefully you will have had a similar experience that you can tell us about in the comments.

In this blog entry, Borgen sets out to highlight that science fiction can be a useful tool for international lawyers and foreign policy professionals. He notes that certain works provide a useful optic through which law and international policy can be considered and gives the example of Iain Banks’ ‘Culture’ series, which challenged prevailing notions of good and evil, moral relativism and ends-based justification. The ability for fiction to convey ideas that contest mainstream thought or challenge dominant narratives is certainly one of the key components that makes fiction such a useful tool for learning. Fiction can evoke alternative visions of the world (and its possible futures), or as Borgen puts it, fiction can be a way of seeing the present from a new angle. However, despite brief declarations of science fiction’s usefulness (and a great list of recommended sci-fi reads) Borgen does not reflect further on why fiction is such a useful tool or how we might get the most out of it, which I think could have been useful for gaining a greater understanding of fiction’s deeper potential. This got me thinking about what it is about fiction that makes it a particularly good tool for learning and about the process of this learning itself.

One of the greatest powers fiction both wields and enables is that of vision. By capturing a certain vision and anchoring it in place – be it through ink on a page or images on a screen – fiction both offers a vision (that denoted by the author) and demands a vision (an interpretation from the reader). As these two distinct visions collide, an ether bursting with overlapping and opposing ideas/thoughts, points of familiarity and drastic divergence is created. In order to glean the most useful insights from fiction, I think we as readers must seek to continually inhabit that chaotic space of conflictual ideas, endeavouring to tease out the unapparent by seeing beyond the surface narrative. A quote I am particularly fond of articulates one aspect of this learning opportunity nicely: ‘Vision is the art of seeing things invisible’ .1 By seeking out the invisible within fictional narratives – the unaddressed and the unarticulated by an author for example – readers can awaken useful lines of inquiry that may inform our understanding of today’s reality or tomorrow’s future. It is not only what is said or depicted within a fictional narrative that should capture our attention, but also what is left unspoken. What might such instances (whether purposeful omissions or simple oversights) reveal about the limits or flaws in our current thinking and exploration of certain issues?

Fiction is a multifaceted and ongoing process, one that begins with the author, but then wholly surpasses the author to evolve and take on a new form in the hands of the reader. With each reader’s interpretation comes a unique vision of that narrative itself, one that is imbued with countless connotations specific to that individual’s own lived experience. If fiction is a multi-layered process, then the way in which we learn from it can be too. Whilst thinking about this, I was reminded of an observation made by literary theorist and philosopher Roland Barthes on the difference between authors and writers. He notes that whilst writers consider their work an attempt to resolve an ambiguity of some sort, authors know that their work ‘inaugurates an ambiguity’ and offers itself to the reader as ‘…a monumental silence to be deciphered’.2 For me, this absolutely sums up the power of fiction as a medium: fiction is always a starting point and never a final destination, it is a literary spark that ignites a much vaster constellation. A constellation of thought just as much as of vision. Coming back to fiction as a tool for learning, particularly the idea of addressing the unarticulated within narratives, it is by deciphering these silences that we begin to see beyond the narrative itself and expand this constellation further. By doing so we can arrive at a deeper understanding of the limitations in the ways that we think, observe and approach certain issues; lessons vital for improving our present reality and impending future.

This week’s topic is one that is very close to my heart. I am currently reading for a PhD on essentially, just this point – using science fiction to reconceptualise our understanding of modern-day biopolitics alongside the emergence of the computerised state. As such, I am more than interested in the link the author describes between SF and statecraft, plus issues relating to citizenship, surveillance, technology, autonomy and military ethics.

We should not forget here that SF is absolutely fundamental in helping normalise new technologies, or even inspiring new uses to which technology could be put. Star Trek for example, helped normalise the concept of computers in the home, while the likes of Asimov, Clarke and Heinlein all helped stoke the public imaginary for humankind’s first forays into space.

One caveat I would raise here however is that while we can certainly use SF (and other fiction) to help us understand ‘bigger issues’, we do need to be careful how we analyse them. Many texts can be misrepresented or misunderstood based on a cursory, simplistic analysis, and this can only harm our understanding as a result. After all, often there is much more meaning to be found between the lines in what’s not said, rather than what is.

In general, I think that fiction can be an excellent tool for enabling understanding and discussion of greater issues. Primarily I would put this down to the emotional connection that skilful writers can create between readers and characters, and the sympathies that one can develop with someone completely different. Afterall, there’s nothing quite like developing understanding of another’s perspective when it is too emotionally difficult to think any other way – I doubt anyone could walk away from To Kill a Mockingbird without a greater understanding of race relations. Nor could anybody walk away from James Ellroy’s works without an appreciation that all people have deep faults.

Secondarily, the artificial nature of fiction allows for situations to be created which force difficult decisions that may never happen in real life. The upshot of this is that major issues we may have been ignoring are suddenly very much in the frame. For instance, John le Carre’s A Delicate Truth shows us how even in times of human rights, some degree of social mobility, and being shielded by middle class sensibilities, we never consider the truth that everyone without power can be done over purely so that those with power can retain and expand their power.

Of course, political science fiction isn’t all good. Because stories are open to interpretation, people remember them differently. This causes some annoyance in my own work on autonomous weapon systems. I’ve lost count of the number of articles (both periodical and peer-reviewed) which suggest Asimov’s rules of robotics as the basis for governing killer robots. This is despite the entire point of his books being that his rules sound good but don’t work in practice. Perhaps this is also symptomatic of modern academic life, that there are such great pressures on people that most people don’t have the time to do their own work the justice it requires.